“Fumie, do you know you have a bald spot here?”

My hairdresser was touching the back of my head, just above the hairline. I knew I had a small bald spot around there; it was a scar from a small wound I got when I was a kid. But I thought she knew about it. She turned the chair around and handed me a hand-held mirror to show it in the bigger mirror in front of me— Yeah, right. There was a bald spot out there, about the size of a quarter. She told me to keep my eye on it as those things could get bigger quickly. 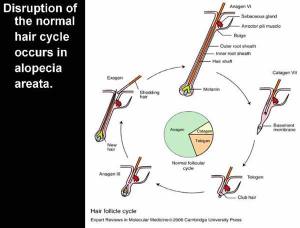 I remember my sister had one a long time ago. Her baby girl had to be hospitalized from an infection. My little niece was in and out of the hospital for a short while before fully recovery, and my sister was obviously under serious stress. They say stress causes this round baldness, called alopecia areata, and it tends to run in the family. I couldn’t think of my life being free from any stress, and since my sister eventually got well completely, I was not that concerned about the fact that I had a bald spot on my head. It was April 2010.

Every time I saw my hairdresser, the bald spots changed their locations and sizes. While some spots filled in, a few new spots appeared. But I was losing more than gaining overall. By Spring 2011 I wasn’t able to walk out from the house without a hat, and any remaining hair was turning white. One morning in April last year I woke up and found my right eyebrow gone. “—–.” My eyebrows never looked like those of Brooke Shields, but it was truly an overnight episode. I was amazed. My doctor put me through a number of tests to figure out the cause of this alopecia. But so far we haven’t discovered anything wrong with me physically.

It will be the fourth year this spring since the onset of the alopecia. I decided to take this occasion to make it public so that you all know what’s going on. I occasionally receive emails and inquiries as well as the whispers from my helpers like, “Fumie, so-and-so was wondering if you were sick!” I’d like to thank you for your kind attention to the matter, and let me tell you that I’m totally fine except that I’m pretty bald right now.

The doctors tell me that there is no known cause of this type of alopecia, thus no effective treatment. It appears in about 2 percent of the population, and there are over 5 million people suffering from this disorder in the US (I’m just one of them). If any of you are in the medical field and discover the mechanism of alopecia and its remedy, I bet that could be Nobel Prize material.