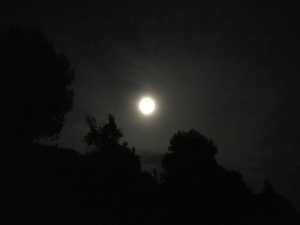 The year 2018 started out with a so-called Super Moon if you remember — it is a full (or new) moon that occurs when the Moon is near or at the closest point to the Earth on its orbit called the perigee. Since the Moon is closer to us than other times, it appears bigger thus brighter (when the lunar phase is full). This Super Moon was actually the closest Super Moon throughout 2018. So, you would think that we already had the best show of the Moon this year.

The Moon takes 29.5 days to circle around the Earth. Consequently, we will see a second full moon this month, that is called a Blue Moon. Incidentally this Blue Moon will also happen near the perigee, that makes it a Super Moon again, and will be occulted in our planet’s shadow displaying the total lunar eclipse on the 31st. Wow! That’s a rare occurrence. We will see the total lunar eclipse of the Super Blue Moon; some call the eclipsed moon a Blood Moon, so it will be the Super Blue Blood Moon. (In the East we call the color of the moon in the total eclipse “copper” – I think it sounds softer than blood.) But, oh well, in either way, this will be indeed an extraordinary month to see two full moons in this manner.

Then following February will have no full moon. Look above – the lunar cycle is 29.5 days. That is longer than the number of the days in February, isn’t it? So, we’ll see the Moon, of course, but not in the phase of full. And remember; a month without a full moon can only happen in February because of this.

We will have a repeat of January in March, that we will see a Blue Moon again. The first full moon will be on the 1st of the month, then the second full moon, the Blue Moon, will occur on the 31st. Neither of them will be a Super Moon this time (to my knowledge at this moment; forgive me if I’m wrong), but it’s still uncommon to have a Blue Moon again within two months. You know the way of saying, once in a Blue Moon, that means something that doesn’t happen frequently, don’t you? Statistically a Blue Moon occurs once in about two and a half years. So, we are now witnessing some very interesting moments in history.

I have kept my weather log ever since this winery operation was initiated. In the last December when I was preparing my book for 2018, this moon behavior caught my attention. As I filled the calendar in with the lunar phases along with other phenomena I follow every year, I realized what kind of year this 2018 would be. — I have a memory of having a year just like this in the past. Two Blue Moons and February without a full moon in between. When was it? Which year?? — It was way before this electronic era when few media would bother picking up some “little” star incidents into their news – perhaps except some astronomy-related magazines and articles. In the frigid January the Moon started its trek from waning to waxing; spent February without getting full accordingly. By the time the second Blue Moon of that year arrived, we were here getting ready to open our Tasting Room door to welcome another season in spring. And, so will we again this year.