Last year my home country Japan welcomed the new emperor.  Emperor Akihito, the 125th Emperor of Japan, abdicated on April 30th, and his son, Throne Prince Naruhito, ascended to the Throne the next day.  This was the first time in 202 years since the last imperial abdication took place in Japanese history, and now there are the Emperor and the Emperor Emeritus co-existing in the nation.  (I wrote an article about this historic event in April 2019 Newsletter.  Click here to read it.)

There were a series of ceremonies for the Enthronement of the 126th Emperor of Japan, Naruhito, throughout 2019.  Here are some snapshots to share with you.

Emperor Naruhito, accompanied by Empress Masako, gave his first speech as an emperor in front of the representatives of the people at the Imperial Palace in Tokyo on May 1st shortly after the Ascension Ceremony.

The Proclamation Ceremony, the most notable of all, took place on October 22nd in the Palace in front of 1999 guests, the foreign and domestic dignitaries.  There were two structures, Takamikura and Kichodai, that the Emperor and the Empress resided during the Ceremony respectively.  They were eight-sided buildings, about 22- and 18-foot high, that always remind me of gazeboes I see around here.  The form of the structure has been in use since the 8th Century for the imperial enthronement.  These particular two buildings were built in 1913 for the Enthronement of Emperor Taisho, Emperor Naruhito’s great-grandfather.  They were broken down into smaller pieces and brought from the Imperial Palace in Kyoto, then put back together for the Ceremony in Tokyo.

Emperor Naruhito wore the Kourozen-no-gohou, the robe made with the fabric in the color that is permitted to be worn only by an emperor.  The use of the robe of this kind was first noted in the late 8th Century.  Here in this image Emperor Naruhito is standing in Takamikura with the text of the Proclamation in his hands.  The Imperial Treasures he inherited as the proofs of the throne are placed beside him. 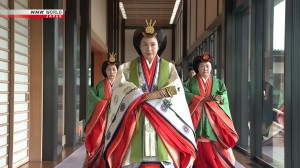 Empress Masako dressed in the 12-layered kimono with the traditional hair piece.  The style of this costume was also established in the late 8th to 9th Century.

Motorcade Parade was planned to immediately follow the Proclamation Ceremony first.  But Typhoon Hagibis left devastating damage to the wide areas of Japan just before the Ceremony.  The Administration decided to prioritize the rescue effort by rescheduling the Parade to be on November 10th.  The procession took about 30 minutes in central Tokyo from the Imperial Palace to the Emperor’s residence, the Akasaka Estate.